3 reasons why Anchorage International Airport is so unique

I haven’t visited Alaska, but I have made a brief stop at Ted Stevens Anchorage International Airport (long story…SEE: 2 people getting engaged and 1 going into labor on my crazy flight). According to OpenFlights, it is also my northernmost and westernmost airport visited, although it is obviously up for debate where west ends and east begins.

What is not up for debate is that Anchorage airport is one of the most unique in the world. Here’s why:

Back in the day before our era of modern ultra-long-range jets, planes required (at least one) pit stop to travel between North America and Asia. The distance was simply too great for the aircraft of the time. Since the shortest great circle distance for many Asia routes involves flying over Alaska, Anchorage became a standard pit stop. It is the largest and most well developed airport in the region, and the constant traffic just cemented it on the map. 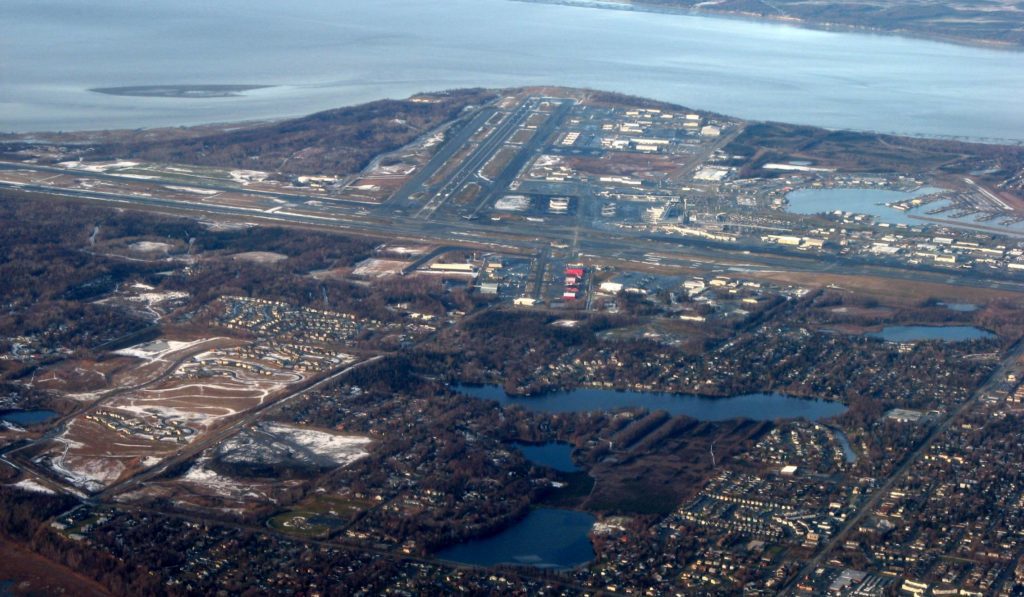 As recently as the early 1990s, Anchorage saw around 100,000 international passengers per year. Now most people get to wave as they pass by on their 16-hour direct flight to Hong Kong. Anchorage is lucky that it even has some seasonal international service these days. Where, you might ask? Frankfurt, Germany. And also Reykjavik, Iceland. Weird? Blame the German tourists. They also visit the Yukon. There is a seasonal Frankfurt-Whitehorse route. Seriously.

While the days of Anchorage as a pit-stop for passenger planes are over (unless you’re as unfortunate as I was), it remains a hub for cargo planes. As a passenger, connections can be annoying enough, but having to make a pit stop on a direct flight is probably more annoying. Lately, a number of flights have been experiencing this flying westward from the U.S. East Coast, turning what should be a 5-hour endeavor into the equivalent of a transatlantic travel day.

Cargo planes are an entirely different animal. Fuel burn is a big part of the equation, but so is the total payload you can deliver. And there are no passengers to inconvenience. Flying long-haul flights is costly, as the amount of fuel needed increases dramatically the further the distance flown. This reduces your payload while increasing your costs. It can be much more cost-effective to make a pit-stop along to way, gas up, and take off again.

Anchorage’s unique geography again lends itself to being a great mid-point for U.S.-Asia cargo planes. The airport handles over 500 wide-body cargo planes every week. I was surprised when I saw a number of Asian carriers’ cargo 747s at ANC when we made our emergency landing last year. But I really shouldn’t have been. It now makes complete sense. Not sure what this ANA 777 was doing there, as it appears to be a passenger plane. Anchorage is so unique in terms of its usage as a cargo plane pit stop that it is even exempt from some USDOT regulations, including the Jones Act, which forbids a foreign carrier to transport goods between two points in the U.S. This allows for refueling, cargo transfer, and other efficiencies.

Alright, you may accuse me of totally misleading you by the title of this post, but I want to hammer home that the location of Ted Stevens International Airport is its best asset. Three times over.

The ability for planes to make a quick pit stop in Anchorage cannot be understated. With a unique rapid fueling system and the fact that most planes don’t need to load or unload cargo, cargo planes can be in and out quickly. They don’t even have to deviate much from their course. Anchorage is but a slight deviation from the direct route along many U.S.-Asia cargo routes. While Alaska may seem far away from everything, it’s actually just the opposite when it comes to air travel. If you’re at ANC, you’re within 9.5 hours of 90% of the industrialized world. There is no other airport quite like it.

Just as location is the number one feature of real estate, it is usually the number one consideration for airports as well. And Ted Stevens Anchorage International Airport has one of the most unique locations, giving it an unparalleled competitive advantage.