Daily Getaways are an annual promotion run by the US Travel Association.  Run for a few weeks in the spring, each day there is a particular deal (or deals).  For Daily Getaways 2015, they have announced the first half of the schedule, and there are definitely some of the deals that pique my interest (as well as some complete duds IMO)

What’s the schedule for the Daily Getaways

Each weekday, starting on March 23, 2015, there is a different deal.  The deals run until April 24, 2015, so there’s a total of 25 different days with deals.  They’ve released the first 3 weeks already at the Daily Getaways site 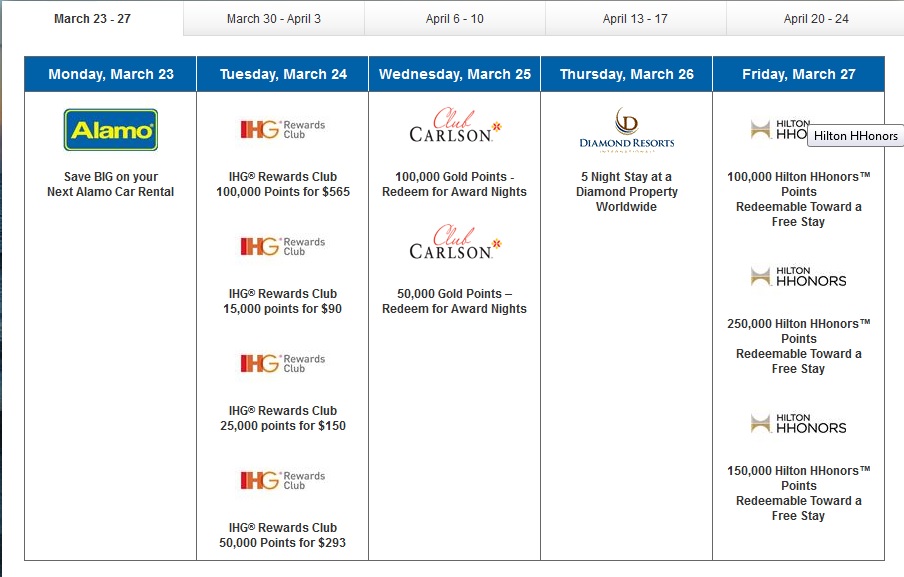 How do the Daily Getaways work?

Each weekday that there’s a deal, at 1pm, you can log on to the Daily Getaways site, and buy whichever of these interest you.  You can see that for example the Hilton HHonors deal says that you can buy points “redeemable toward a free stay”, but really they’re just normal points that you can use however you’d normally use points (i.e. there are no restrictions).

Even the deal for Hyatt that says “2 Nights in a Premium Hyatt Hotel” is just for 24,000 Hyatt points at a discount Here’s the detail on the first deal, for Alamo car rentals on March 23rd, 2015 This is a 50% off certificate for anything at Alamo, and is likely IMO to go pretty fast.  The Deal Mommy had some good data points on the fact that this deal actually stacks with several other Alamo discounts / offers.

How fast do I need to be?

Depends on the deal.  On a good deal, pretty freakin’ fast.  Like Southwest Airlines 24 hour before departure fast.  On the ones that you’re super interested in, you can probably assume that most OTHER people are also interested in.  So get ready at 12:58 or so, arm yourself with multiple browsers if you need to, and act fast.

On some of the other ones, the deals will still be around for most of the day or even further into the next day.  Last year, although some of the IHG points had sold out, I was able to buy the IHG Daily Getaways deal the next day.  We ended up using that on our “pancake maker” hotel stay before our 170,000 point family reunion plane trip.

Besides all that, there is a bit of fine print.  From the Daily Getaways FAQ:

Additionally, some offers have a purchase limit per offer for the loyalty program number applicable to that offer. If this is the case, it will be indicated in the offer details.

Also note that in years past, you got a 10% discount when paying with an American Express card – but that is NOT the case this year.  No matter how you pay, you’ll pay at face value

Which of the Daily Getaways 2015 do you find most interesting?  I’m intrigued by the Alamo deal as well as maybe the Hyatt or IHG deals.  Though both Hyatt and IHG are partners of Chase Ultimate Rewards, and I still have some pretty healthy balances of UR.