On a recent early morning flight out of Jacksonville International Airport (JAX), I spent an hour at The Club JAX using my Priority Pass membership (this is a benefit of my Chase Sapphire Reserve card).  While JAX is one of the fastest growing airports in the country, it still only consists of two concourses and 20 gates.  I must admit I was pretty excited when I learned that JAX was opening a Priority Pass lounge as I depart from the airport at least a dozen times per year. Access to the lounge is available to Priority Pass, LoungeKey, Diners Club International and AAA members.  Several credit cards offer lounge benefits to cardholders.  Day passes are available for $40 per person as well.  The lounge is open daily from 4:30 am to 9:30 pm EST.

The Club Jax is easily accessible regardless of the airline you fly as all JAX gates are in the same building.  Even better, the lounge is in a great location since the entrance is almost directly in front of the security line.  After exiting security, it is a 20 second walk to the far right-hand side of the food court where the lounge is located.  It is next to Auntie Anne’s pretzels which is near Gate A1. 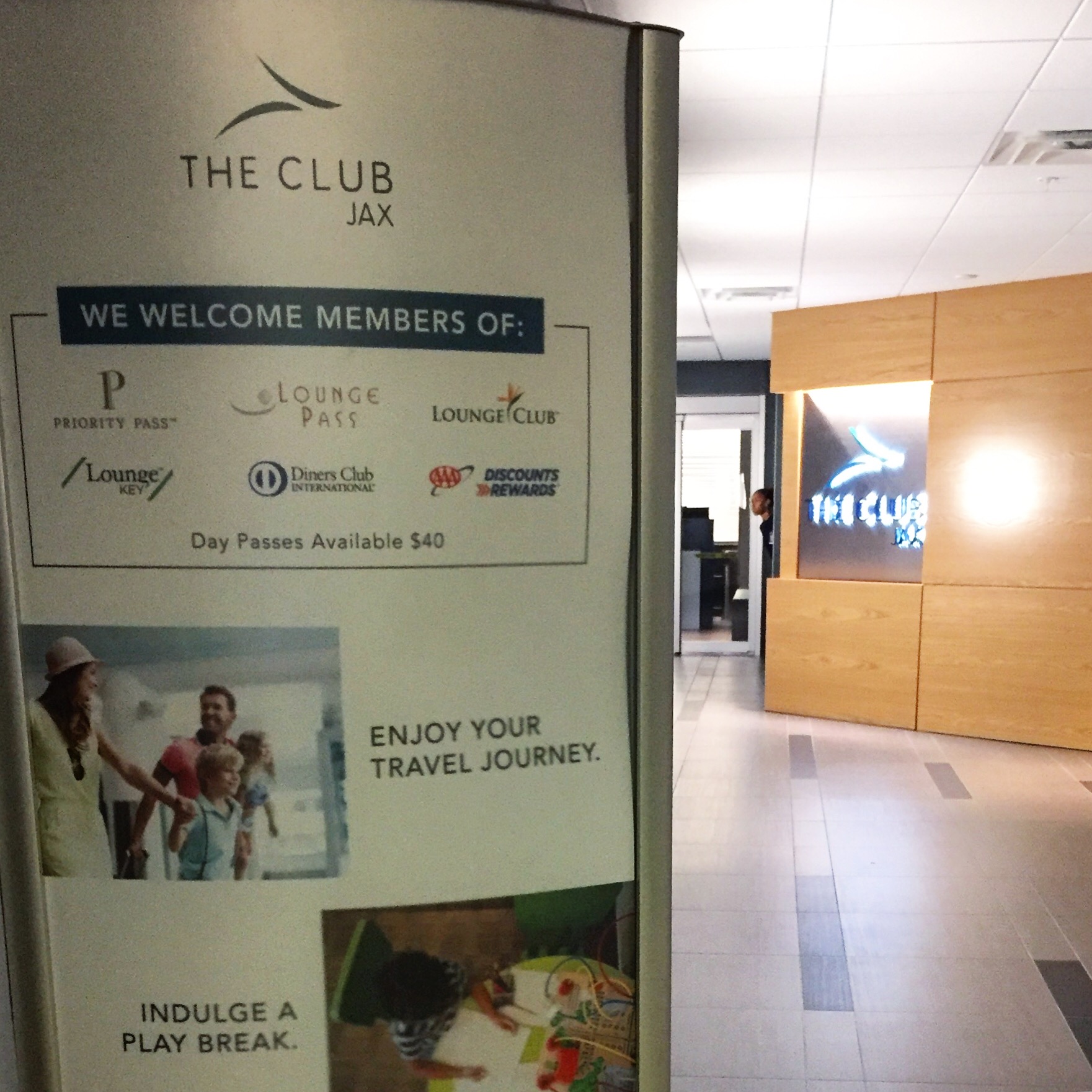 The entrance is pretty nondescript. There is an automatic sliding glass door at the entrance and a short hallway to the check-in desk.

Check in at The Club at JAX was quick and easy.  There were a few people ahead of me even though it was 4:45 am, but the line kept moving.  I showed my boarding pass and Priority Pass card which is standard issue for Priority Pass lounges.

The lounge is fairly small at 3,000 square foot and only provides space for 52 people.  There are 6 “Signature Zones”.  These include a Relax Zone (small room with three chairs), Productivity Zone (room with small table that could fit maybe six people with laptops), Kids Zone (area with games and IPads for the tots), Replenish Zone (Food and Bar), Resting Zone and Refresh Zone (Shower and Bathroom).  The layout provides privacy with the separate rooms but could present an issue if you are traveling with multiple people and each room is only partially filled.  In this case you may only be able to find seats for one or two people in your group which may force you to separate to find seating for everyone.  Several areas of the lounge provide a great view of the tarmac which I prefer to many other lounges I have visited.  Also, this is a point of interest for the youngsters. Food at The Club JAX

It seems that many domestic lounges offer a fairly basic set of food options, and the choices at The Club JAX followed suit. I arrived before the “hot breakfast” which runs from 7-10 am and consists of bacon, eggs and home fries.  I was pleasantly surprised that there were multiple options considering the time and I decided on a banana and oatmeal with craisins and candied pecans.  The self-serve coffee machine offered numerous choices and I went with a double espresso which was tasty.  There were other food options including bagels, pastries, English muffins, peanut butter and jelly roll-ups, fruit, yogurt, granola and cereal. Beverage options included coffee, tea, Coke products, Perrier, tomato juice, and still and sparkling water.  There was also a smallish bar, but I didn’t try any of the adult beverages.  The full bar included a selection of local craft beer, wine and some lounge specific cocktails. The WiFi offered at The Club JAX was easy to access with signs offering login details placed in multiple spots around the lounge.  JAX has good airport WiFi already, but I feel like this was noticeably quicker.  There were only about 10 people in the lounge when I visited so perhaps this contributed to the fast speeds.

The addition of The Club Jax to my home airport makes the Priority Pass drastically more valuable to me.  It will also be a great pit stop for the family when we are heading out for trips.  My main concern with the lounge is the size.  While there was plenty of space when I left to catch my 5:45 am flight, I did have a friend visit before an afternoon flight and he said that at one point all the chairs were taken.  I can see space becoming an issue at peak times or if flights are delayed.  The rooms are compact, and the entire lounge only has room for 52 guests.  The bar did not have a ton of capacity either and with the growth JAX is experiencing I imagine that the increased traffic will lead to frequent congestion.  I hope I am wrong about the overcrowding.  If you do visit The Club Jax when the crowds are light however, it is a great option to grab a quick bite to eat and a drink before catching your flight.