Getting from CPH airport to Copenhagen by taxi You can surely take a taxi from CPH airport to Copenhagen but it will be fairly expensive.  The 15 minute ride will cost between DKK250-300 (approximately USD$40-50)

If you do want to take a taxi from CPH to Copenhagen, you’re likely to save money by using a service like GO Airlink Shuttle

CPH airport to Copenhagen by Uber or Lyft

Uber and Lyft actually don’t operate in Copenhagen (it’s a long story) so you will not be able to use Uber to get from CPH to Copenhagen city.  There are a few car sharing alternatives such as Blacklane or GoMore if you’re interested.

If you do sign up for Uber or Lyft, signing up through my referral code you will get you $10 off on your first ride.

While taxi, bus and other ride share services or limos are all options to get from CPH airport to Copenhagen, in my opinion, the absolute best way to get from CPH to Copenhagen is either train or metro, depending on where it is you’re going in Copenhagen.  Both the metro and the train have a station at the CPH airport, and one ticket will cover either mode of transport.

Here is a picture of the Copenhagen metro map, zoomed into the area with the airport and most of the central stations 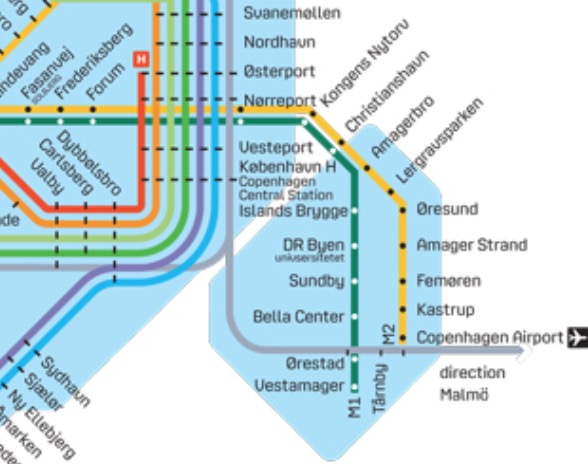 If you need more information, you can visit the official DSB website for other stations.

Once you arrive at CPH airport, if you’re trying to take the metro or train from CPH to Copenhagen, you simply follow all of the exit signs through immigration, customs and beyond. Once you exit the secure area of the airport, you are entered into an open area that reminds me of a central train terminal.  Off to your right, there is a huge bank of red machines with a sign for train and metro tickets. There are several DSB employees over there helping to manage traffic and guide people.  Simply buy a ticket for the stop that you are going to, and pay the cost. To go from the airport to most places in the city, you will need a 3 zone ticket, which at the time of this writing costs DKK36 for a one way adult ticket (about USD$5).

If you’re going to Nørreport, Kongens Nytorv or anywhere on the M2 Metro line (pictured in yellow above), you should ride the metro. If you’re going to Kobenhavn Central (Copenhagen Central) train station, you’ll want to ride the train. Again, the tickets are the same.

If you ride the metro, simply follow the signs to the M2 Metro station. We were headed from CPH to Copenhagen Central station, so we took the train.  Our train left from Track 2 (we asked a worker, though there was also signage). Once we got down to the track, the sign looked as follows You can see that the approaching train is headed to Niva by way of Copenhagen C(entral).  We boarded the train, and 3 stops (about 15-20 minutes) later we were out at central Copenhagen.

There is space for luggage on the train – though it might get difficult if you had a LOT of luggage.  The train was not crowded by any means, at least in the early afternoon when we took it from the airport to Copenhagen.

Readers – what are your tips for the cheapest and best way from CPH Airport to Copenhagen city center?