I’m not a general fan of Twitter. The meager value available is that I will (sometimes) be notified of blog posts, news, and/or fare sales quicker than via other channels. But that only really applies if I actually check my feed in the morning. Other than that, I would gladly leave it.

That being said, lately I have found it to be a decent place for customer service requests. And now that I have made several over the past few months, I figured I’d share some of the results.

The Southwest Twitter team was absolutely brilliant when we were flying home from Costa Rica. I found tickets out on November 4 from San José to Oakland, connecting through Houston Hobby. I’m not sure what is up with Southwest’s published fares, but this was one of the only days this itinerary worked on a single ticket. And it worked well with our schedule and was a mere 12,200 miles per person plus taxes. I wanted to pull the trigger.

But I was hesitant. We hadn’t finalized our kids’ names, and we needed their documents still. Not to mention our timeline wasn’t 100% certain. But with Southwest’s incredible cancellation policy, booking now would be ideal. We could always cancel if we had to.

So I reached out to Southwest about the name change, explaining our unique situation with adoption. I got an answer in less than 10 minutes. The agent told me that they could add a note to the reservation and that we could process the name change at the airport with their documentation. I had the tickets booked within the hour. 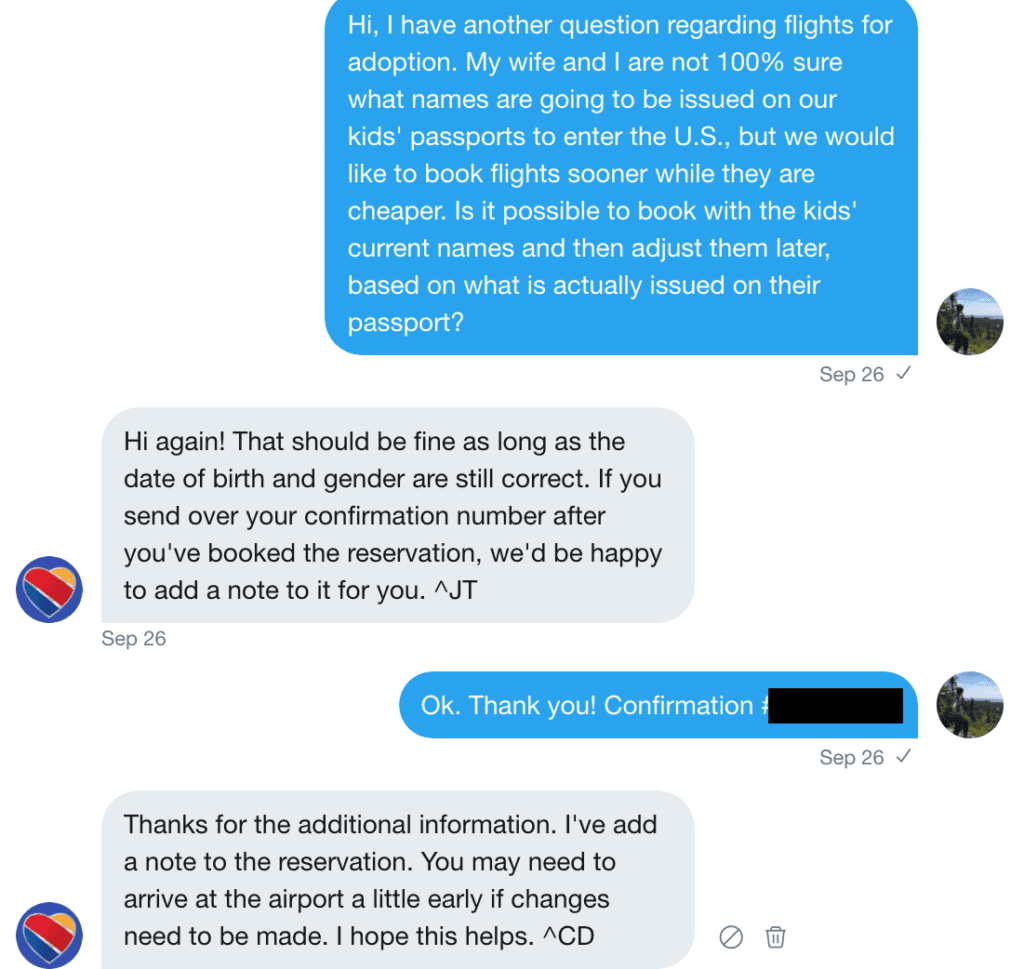 Second round: a few days before our flights, I sent another message asking if a rep could process the name changes ahead of time. The answer was affirmative, and I sent pics of our kids’ passports to the rep. Within minutes, he had the names changed. He fat fingered a letter and I had to ask for a second change, which was no problem either. All said and done, Southwest allowed us to save a bundle on our return flights from Costa Rica. Alaska Airlines has a great social media team. I’ve sent a number of Twitter messages over the past several months, regarding everything from confirming the free bag benefit of the Alaska card on Virgin America metal, to figuring out why our seats were changed on an upcoming reservation. Their team never fails to be the fastest to respond.

Sometimes the answer wasn’t helpful (i.e. they couldn’t fix the names on a reservation made with Avios), but they always get back to me promptly.

Our travel home from Costa Rica this fall included an overnight in the Bay Area before driving home. As we’d booked 6 people into the room (some Hyatt Places are amazing for this, by the way) and had a toddler, I requested a crib ahead of time via Twitter. But when we arrived in the room, lo and behold, it was lacking a crib. Guess I gotta go back down to the front desk. Maybe they’d send their cool robot up with it.

Moral of the story: probably should reach out to the hotel directly for a very hotel-specific request.

IHG only gets a mention since they were a relatively recent interaction I had. I reached out about why the bonus points hadn’t posted for my third quarter 2017 Accelerate promotion. The response time was okay, but I was dissatisfied with the response, even though it was technically correct.

All the customer service rep did was confirm that I was indeed ineligible for the promo, per the terms. Which I should have read (SEE: How we lost out on 26,500 IHG points). But I still find them frustrating. I’ll make sure this does NOT happen in first quarter 2018 (SEE: Looking to maximize my killer IHG Accelerate offer in early 2018).

Since I couldn’t find a place to do it online, I figured asking Hertz via Twitter would be the way to go to add my Gold number to a reservation. Prompt response, but Hertz didn’t even try. Cancel and re-book? Not after I found a stellar rate and pounced on it. I’ve never seen a minivan for $109 one-way out of the Bay (dirty secret, I booked from the Costa Rica version of the site, all in Spanish).

Either the Hertz team isn’t able to access any reservation info, or they just don’t care. I sure hope it is the former.

Twitter is becoming a quick go-to for me when I need minor assistance with a reservation, or have another general question. If the need is urgent, I’ll obviously pick up the phone and call them. But given that this typically requires navigation of phone menus, hold times, and a lot more effort, Twitter is preferred when possible for quick customer service.