Long time readers of Points With a Crew might know that one of the goals on my travel bucket list is to visit all 3,143 counties in the United States.  I subscribe to the tenets of the Extra-Miler club, whose motto is

The shortest distance between 2 points is no fun!

After my recent trip to Yellowstone and Mt. Rushmore, here was my progress to-date (this is a few weeks out of date as it does not include the 68 counties I got in Minnesota, Wisconsin and North Dakota back in August) The map is color coded by year of first visit, with reds the oldest and my most recent travels in different hues of blue.

A “county trip” is what I call a trip whose specific goal is basically to drive around an area, visiting as many new counties as possible.

I planned to speak at the Family Travel for Real Life conference last Saturday.  Originally I had planned to just use 4500 Avios to fly from Cincinnati to Washington DC (a deal that was just eliminated) – out on Saturday morning and back on Saturday night.  Then I got the news that US Airways had canceled the flights and automatically rebooked me on flights that would not work out.  Sometimes schedule changes work out well (thank you Delta!) (thanks American for giving me 16 extra hours in Rome for free!), but in this case, there were no flights that worked for me.

So after exploring options, I found a nonstop flight from Columbus on Southwest that was actually CHEAPER than what I would have paid for an Avios flight!

That put me in to Washington about noon on Friday, so I figured I had 7-8 hours on my hand.  What’s that mean?  COUNTY TRIP!

Most of my visited counties in Virginia / Maryland come from living with my dad in Northern Virginia for a few years (and a trip out to Ocean City and a few trips to and around Washington DC.  You can see the section of my county map here (the blue section was this month’s trip) I decided I would go through Southern Maryland and Eastern Virginia before coming back up I-95 through Fredericksburg.  I also decided, due to the Law of Conservation of Counties, that I would take a 1.5-2 hour detour west of I-95 to pick up those 3 central Virginia counties (Culpeper, Rappahannock and Madison)

My Southwest flight (that I took once US Airways / American canceled my original flight) was scheduled to land at 11:25 a.m. but actually got in a few moments earlier, which was nice.  I hustled off the plane and through the airport all the way to the DCA rental car area (where I had rented from Avis LAST time I was in DC), but realized once I got there that Dollar Rent a Car was actually OFF-AIRPORT!

I made my way south on US 1 to I-495 North (technically… east) around the southern edge of the Beltway, crossing into Maryland and going south on MD 5 before heading east on the double roundabout at MD 231 and into Calvert County, Maryland for a brief out and back.  Heading back on MD 5 South, I entered my final county in Maryland (St. Mary’s) After completing Maryland, I continued south, crossing back into Virginia on the Potomac River bridge (technically the Governor Harry W. Nice Memorial Bridge – US 301) before going east on Virginia State Route 3 roughly paralleling the Potomac River.  In the town of Kilmarnock, I made a brief out and back detour that picked up Northumberland County, but annoyingly there was not a sign (though I kind of expected it)

Crossing over the Rappahannock River on the Robert O. Norris Bridge and into Mathews County, I then turned back west, reaching a momentous milestone in my trek to visit all 3,143 counties in the United States: the halfway point! 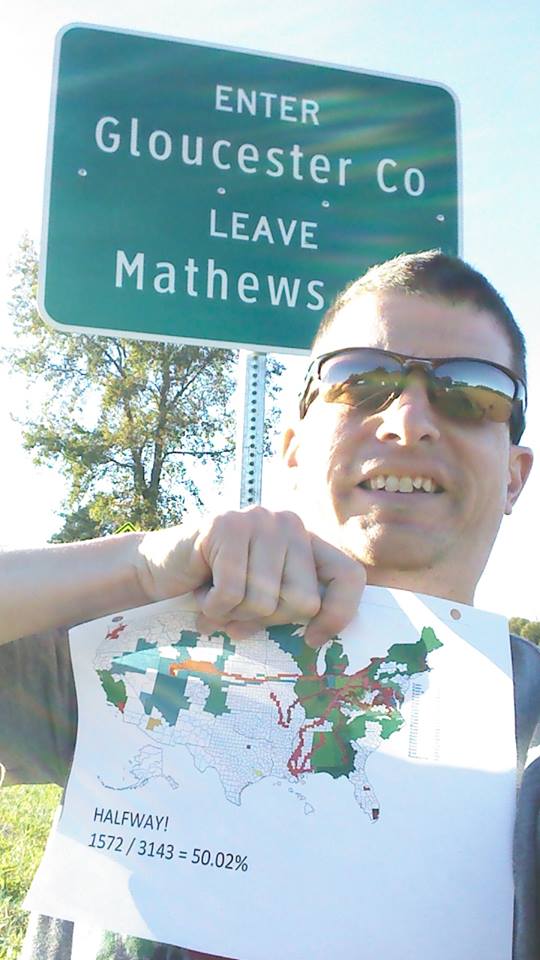 (Have I mentioned that it’s really hard to simultaneously take a selfie while holding a piece of paper on a windy day??!?! Just sayin… 😀

After that it was smooth sailing on US 17, US 360 and VA 30 past Kings Dominion amusement park (memories of visiting there on my honeymoon 17 years earlier), and then up I-95 towards Washington.

I had decided to take a slight detour near Culpeper, Virginia in order to visit 3 counties that were “orphaned” as not visited on my map.  This swung me around to the west of Washington, and I ended up coming into the city at night, eastbound on I-66.

Since it ended up being a bit later than I expected, and already past 9pm, I decided to punt on the Friday night FT4RL dinner and instead just checked into my hotel instead.