While Dan might have a love/hate relationship with Amtrak, living in NYC, I have a love/love relationship. For the most part, I can get anywhere in the Northeast Corridor quickly, inexpensively, and with minimal hassle. With family in New Hampshire and Maine, taking Amtrak NYC to Boston is the easiest way to get home, even if it’s just for a long weekend.

(READ MORE:  The Comprehensive Guide to Amtrak: Everything You Need to Know)

Thanks to the Amtrak Guest Rewards World Mastercard, I’ve generated a hefty stash of Amtrak points, and in this case, I redeemed 7,671 points for a seat in Acela First Class, which is roughly three times the price of an average Northeast Regional Coachclass redemption. With the backstory out of the way, let’s get to the good part: the review, and whether or not Acela First Class is worth it!

I arrived at Penn Station around 8:45, which gave me about an hour to get a coffee, check out the lounge, and get some work done. The station itself wasn’t too crowded, but that may have something to do with the timing of my arrival. Accessing the lounge is simple, you walk up to the door (near gate 7/8 West) and ring the doorbell. Then, you are buzzed in and an attendant verifies your information. Easy!

The lounge was not much to write home about. It’s pretty small, and given its location in Penn Station, there are no windows, so it’s a little dark. 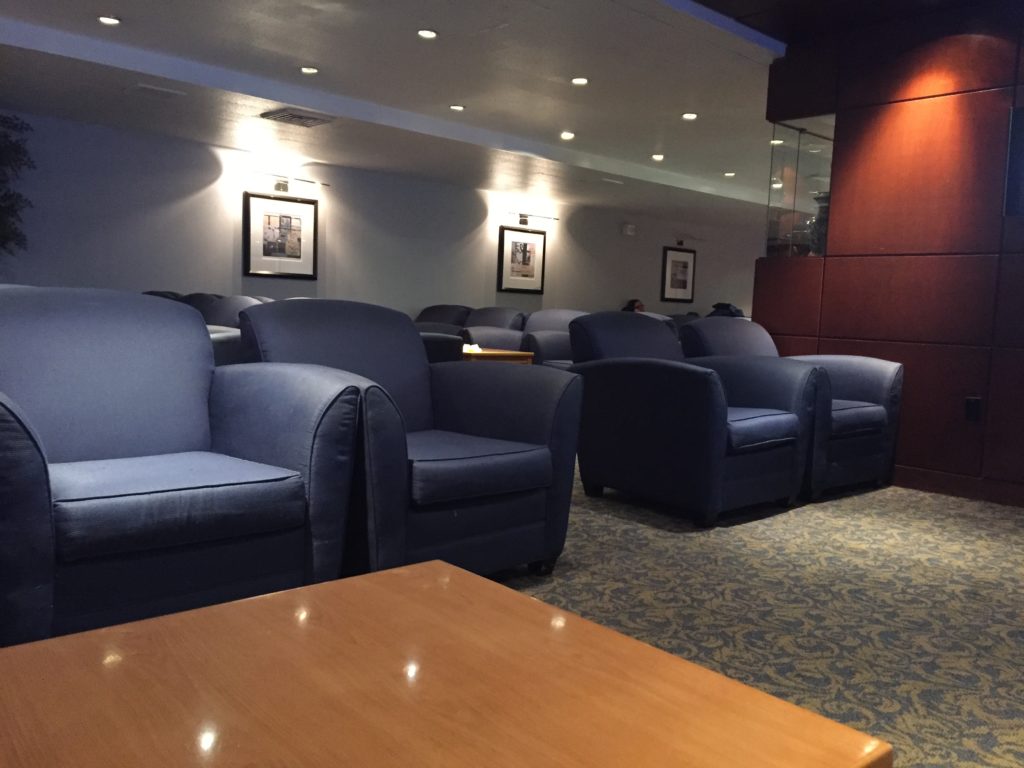 There was no food out when I arrived, only coffee and tea. Unfortunately, I didn’t have a good opportunity to take a photo, but you’re not missing much.

What is a nice benefit is that approximately 15 minutes before your trains departure, the attendant announces your gate, giving you a leg up on all the people waiting for the announcement in the departure hall. As a first class passenger, you also get to board first, which is a nice benefit. In theory this should work well; however, the attendant announced the gate a little late, and by the time I got to the First Class car, most of the seats on the good side of the train (right side going north, it provides great views of the Atlantic Ocean) were taken, so I settled for a single seat on the left side. The seat was relatively comfortable, with plenty of legroom. It’s definitely more spacious than economy on the Delta NYC-Boston Shuttle. It also feels much bigger, given its a 1-2 layout, and the windows are HUGE. Great for watching the scenery roll by.

About five minutes after finding my seat and getting settled, I was given a menu and my drink order was taken. I started with coffee and water. The menu options for my train were as follows: Given this was a midmorning departure, I had my choice of breakfast or lunch. It being only 10am, I decided that I would order breakfast. I ended up choosing the Three Cheese Omelette, and It was served around 35 minutes after departure from Penn Station. Surprisingly, the omelette was actually pretty good. I’m probably not the most discerning eater, but I definitely know when I don’t like something, and this was totally edible, so kudos to Amtrak! (PWaC: I agree – the food on Amtrak is pretty good!) Definitely beat my expectations. It was also served with a granola bar and real silverware. Definitely wasn’t expecting that! My neighbors got lunch (the Flat Iron Steak), and I tried to overhear their reactions, but to no avail. It smelled delicious though!

After the meal service, one of the attendants came by with hot towels. There were two attendants working the Acela First Class car, and both were very pleasant if a little indifferent. My plate was cleared almost immediately after I finished, but then any time I needed something, I needed to get up and ask them. That brings me to a related point: the Acela trains are getting old. The seats seemed to be a little rickety, and parts of the train were a little damaged, like the window shade near my seat. This doesn’t surprise me, as most of the Acela fleet is over 15 years old. Luckily, Amtrak is investing 2.45 billion over the next 5 years to develop the next generation of Acela Express trains. That will make the Amtrak NYC to Boston trip much nicer, based on photos and amenities described! In terms of ambience, let’s get one thing out of the way–I’m a Quiet Car devotee, so every other car seems incredibly loud to me. People answered their cell phones, which is totally their right, but MAN, no one needs to hear how important you are (or think you are!). Otherwise, the atmosphere was good, and I was able to get some work done. The seat remained comfortable throughout the ride, but when taking Amtrak NYC to Boston, I almost prefer the Northeast Regional cloth seats, as they’re a bit more soft.

We arrived at 1:39, six minutes ahead of schedule, giving me plenty of time to catch my bus to New Hampshire, and concluding my Amtrak NYC to Boston adventure.

Given all that, what’s the verdict? I hate to say it, but I wouldn’t pay for it, or probably ever redeem points for it again, as Acela Business Class (and even Northeast Regional Coach class!) are just as comfortable. For me, taking Amtrak NYC to Boston is all about convenience, and less about amenities–a good book and some TV are all the creature comforts I need to make it through a 4.5 hour trip. Although a beer from the Cafe Car never hurts ;-).

Check back in a couple weeks from now to catch my review of the Northeast Regional Amtrak Boston to NYC!