One of the more recent developments in the miles and points world is Chase’s implementation of what is typically referred to as the 5/24 rule.  If you’ve applied for more than 5 credit cards (from ANY bank!) in the past 24 months, then you are almost certain to not be approved for some Chase credit cards.  There have been reports of some exceptions to the 5/24 rule, but I for one remain skeptical of these reports, and at the very least, if you think you’re going to be one of the exceptions for whatever reason…. you’re not. What Chase cards are caught up in the 5/24 rule?

When the Chase 5/24 rule first came out a few months ago, it took awhile for the greater travel hacking community to figure out the pattern to which cards were part of the 5/24 rule, and which were not.  Soon it became apparent that the co-branded Chase cards (IHG, Marriott, United, etc) were NOT affected by the 5/24 rule.  EDIT: While this was true at the time of this post, reports are now that the Chase 5/24 rule will start applying to all Chase co-branded cards in April 2016.

Originally, there was speculation that the Chase Ink Plus and Chase Ink Cash cards were included in the 5/24 rule, but many people did report that they were able to sign up for Chase Ink cards, even with many inquiries on their account.  At this time, the 2 Chase cards that we know are part of the Chase 5/24 rule are the Chase Sapphire Preferred and the Chase Freedom card. 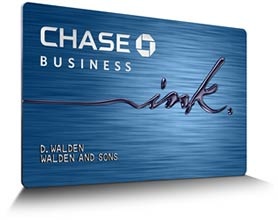 Now, Doctor of Credit is reporting that Chase Ink cards will be included in the 5/24 rule in March.  Meaning, if you don’t have a Chase Ink card right now, and have more than 5 new cards in the past 24 months (from ANY bank), you probably want to add a Chase Ink card

Having at least one premium Chase card is a pretty important part of a comprehensive travel hacking strategy.  The ability to transfer your Ultimate Rewards points to transfer partners like Hyatt, United, Southwest, etc. is a great strategy.  I prefer the Chase Ink over the Chase Sapphire Preferred, because I find the 5x at office supply stores much more useful.

If you have enjoyed this content and want to support Points With a Crew, you can sign up for the Chase Ink here.  The offer is 60,000 bonus points after you spend $5,000 on purchases in the first 3 months, and the $95 annual fee is NOT waived the first year.