After a brief time in the Emirates lounge, it was time to board our flight from Singapore on to Dubai. The classic Emirates first class experience is on the A380 plane, though our plane was “only” a 777. Emirates actually does fly an A380 from Singapore to Dubai, but only on the flight that leaves Singapore at 9 p.m. (and arrives in Dubai at 1 a.m.). That timing didn’t work out for our schedule, so we decided to fly the 10:10 a.m. departure and “only” fly Emirates First Class on the 777

For this flight, you actually go through a security screening AGAIN at the gate (I assume this is fairly normal in some airports but it was the first time I had personally gone through it. That took a very short time except that Carolyn brought some scissors for knitting (oh yeah she knows how to PAR-TAY!) and they made her get them out of her carryon and then sign an exception log.

After a very short time at the gate, it was time to board our Emirates First Class flight. We were in seats (suites?) 1A and 1D – this was my first time being in the prototypical “1A” seat, flying Trevor from Tagging Miles style

I think this is the first time I’ve been riding @tmount style in seat 1a!

We quickly made our way to our seats, since, you know, in Row 1, they’re right there 😀 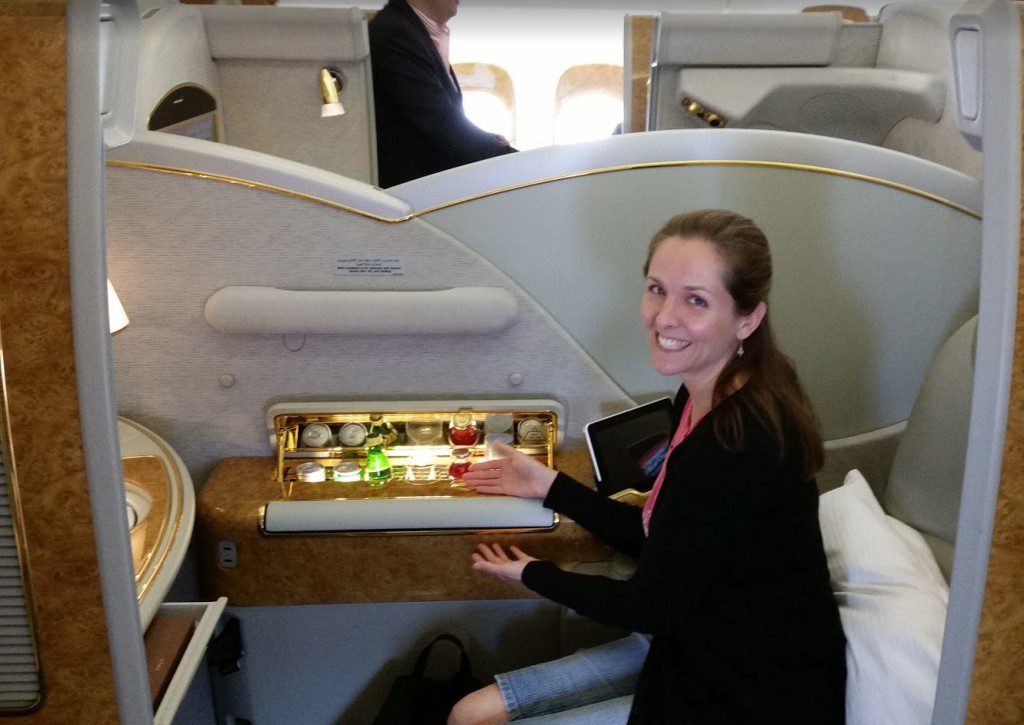 There were only 4 first class passengers on this flight, so the flight attendant offered us the choice to move back into Row 2 into the middle seats (similar to where we were configured on our outbound flight on Japan Airlines first, but we opted to stay where we were.  The purser also came by to introduce herself, and the crew offered a pre-flight drink. I tell you, when you don’t drink alcohol, some of the “magic” of first class is kind of lost 🙂

After takeoff, she came by with some olives and feta cheese which was QUITE tasty

All the Emirates A380s and some of the 777s have wi-fi inflight, but unfortunately, this was not one of the 777s that was wi-fi equipped. Still, there was a MUCH larger selection of in-flight entertainment than either of my 2 Japan Airlines flights or our Cathay Pacific flight on the outbound leg of this trip.  They even had several episodes of Studio C!!!! I enjoyed watching some good ol Scott Sterling and Captain Literally.  The IFE was significantly better than my Japan Airlines first class flight – on this flight there were HUNDREDS of movies to choose from, whereas on my JAL flight from Chicago, I’d say there were only in the tens of movies (unless I missed a menu option or something)

Again, this is a daytime flight, which means that it’s a bit awkward. SIN-DXB is about a 7 and a half hour flight but you lose 4 hours from flying westward. After a bit of relaxing, I ordered my lunch I had the chicken starter and the cod fillet and then a (warm!) brownie and ice cream for dessert After lunch, I decided to take a little bit of a nap, so I changed into my pajamas I was actually able to sleep pretty well (as opposed to the tossing and turning I did on my Japan Airlines first class flight) – I ended up sleeping for about 2 hours, which was a nice nap considering I had woken up at 2 a.m. Dubai time that morning (6 a.m. Singapore time to make a 10 a.m. flight). After I woke up, I kept watching my movie and they brought out a cheese tray which was super good. I was already full really, but when has that ever stopped me from eating more cheese?!? :-). By this time there was only an hour or so left in the flight, and we made our descent into Dubai

Definitely the best flight I’ve been on… so far!